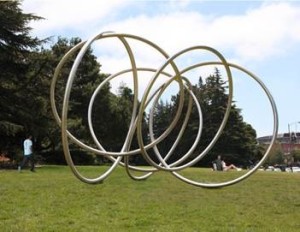 NEW PUBLIC ART FOR PALO ALTO … Palo Altos’ Public Art Commission on July 23 approved a series of public art installations to be placed in King Plaza, in front of City Hall, over the course of 2016. Among them are Bruce Beasley‘s “Rondo,” a sculpture composed of interlocking metal rings, and“Chime,” a work by San Francisco-based artists Dan Gottwald and Scott Watkins that invites passersby to interact with it, pushing on wooden panels to create gentle music. In total, $16,500 was earmarked for these projects. Commissioners also approved a piece of public art that will appear in various locations throughout the city. The Mobile Arts Platform consists of two battery-powered bicycles towing trailers that connect to form a kiosk where passersby can stop to make art and generate ideas. The project is intended to draw attention from city residents who might not attend Art Commission meetings but who would be willing to share their ideas in a more informal setting. In total, $10,000 has been set aside for artist-led community engagement toward the creation of Public Art Master Plan for Palo Alto.

CSMA RECEIVES MAJOR GRANT … Mountain View’s Community School of Music and Arts (CSMA) has been designated as a recipient of a $10,200 award from the California Arts Council, it announced July 20. The grant is part of the Arts Council’s Artists in Schools program, and will go to support Art4Schools, CSMA’s visual arts education program offered to K-12 students in Santa Clara and San Mateo counties. Art4Schools currently serves approximately 16,000 students each year. To learn more about Art4Schools, go to arts4all.org. For a full list of Artists in Schools grantees, go to arts.ca.gov/news/pressreleases.php.

MOUNTAIN VIEW DANCER SOARS … Mountain View native and winner of the first season of FOX network’s popular reality dance competition, “So You Think You Can Dance,” Nick Lazzarini returns to the South Bay with a new production. “Shaping Sound” will perform at Cupertino’s Flint Center for the Performing Arts on Oct. 25, at 3 p.m. The show draws together artists who describe themselves as “visual musicians” — contemporary dancers whose work gives shape to sound. To learn more about the production, go to shapingsoundco.com. Tickets are available at ticketmaster.com.

REDWOOD CITY GETS SPRUCED UP … Redwood City has embarked on a beautification project. Spearheaded by the Redwood City Improvement Association, the project aims to revive the scenic downtown area and make the region a more desirable destination for people of all ages. Among the enhancements of the city center is a 3-D video light show that projects onto the San Mateo County History Museum every Tuesday night at 8 and 9 p.m. Other projects include power washing, street cleaning and expanded valet parking.

The original article can be located here.