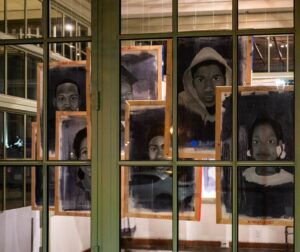 A Difficult Conversation: a commemoration’ offers powerful juxtaposition in paint

Bay Area painter Corey McCall’s new exhibition at the Art Kiosk in downtown Redwood City, “A Difficult Conversation: a commemoration,” is a powerful juxtaposition of tragedy and hope, of loss and inspiration.

The installation, on view until April 11, features 13 bold and brightly colored oil paintings of Black leaders and luminaries — familiar faces such as Harriet Tubman, Angela Davis and James Baldwin — suspended in the air. On the reverse side of these portraits are paintings, in somber, muted shades of black and white, of 13 Black Americans who have been killed due to systemic racism, including Sandra Bland, George Floyd and Trayvon Martin.

“The title alludes to what parents of Black children have coined as ‘The Talk.’ This is the necessary verbal education passed down from elder generations to our younger generation involving the facts of life of being Black in America,” including engagement with authority figures, understanding one’s rights, and “that due to their skin color and facial features, they will not be seen the same as some of their friends and that they may not receive the same empathy or humane decency, even though equally deserved,” McCall, the father of two sons, explained in his artist statement.

“I view ‘A Difficult Conversation: a commemoration’ as a marker in time, a statement for forward movement not regression, and in reality, a memorial to the greatness and accomplishments Black people should be credited and admired for, despite the oppression and adversity thrust upon us,” he said.

The Art Kiosk is located at 2208 Broadway St., Redwood City. The space is illuminated in the evening and viewable at all hours. Viewers are asked to maintain safe social-distancing practices.