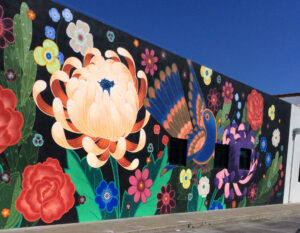 Colorful” seems too tame a description for a 100-foot-long mural which was painted last month on the formerly blank wall of a building at 55 Perry St., near the Caltrain tracks in downtown Redwood City.

Oakland-based artist Jet Martinez is known for his dynamically patterned floral compositions, which take inspiration from the folk art of his native Mexico. The mural is entitled “Chrysanthemums (Amate)” and includes birds among the enormous blossoms.

Martinez’ inspiration came from doing historical research on Redwood City and learned about how Japanese-American farmers were the force behind the city becoming one of the largest chrysanthemum producers in the world.

“My hope is that viewers will find something that reminds them of their own culture in this mural,” says the artist.

Funding for painting the mural came from the owner of the building, who has a desire to work with the Redwood City Arts Commission to bring more high-quality art work to the city.