Let there be light!: Courthouse Square in Redwood City to be backdrop for 3-D lightshow 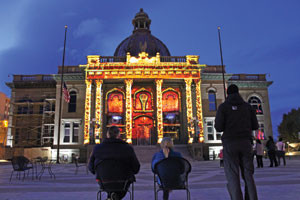 The old courthouse in downtown Redwood City will look and sound like it never has before Tuesday night as world-renowned light show artist Bart Kresa takes a crack at augmenting the historic building’s reality.

Kresa will use the same 3-D video projection mapping he has used to transform the Umaid Bhawan Palace in India and Universal Studios Japan into canvases of vibrant light.

The event is presented by the newly-formed Redwood City Improvement Association and sponsored by the Redwood City Parks and Arts Foundation.

The goal is to attract a big crowd at Courthouse Square on what is typically one of the slower nights in downtown Redwood City, said Eric Lochtefeld, interim president of the association and co-owner of the Fox Theatre property on Broadway.

He and his wife Lori have been busy for weeks leading up to the show in what Lori describes as the association’s “first big splash.”

“Tuesdays are a little slower for businesses and we want to drive people downtown to maybe get a bite to eat,” Lori Lochtefeld said.

Kresa’s installations are usually temporary but the one at the San Mateo County History Museum will be permanent since the association spent about $175,000 to buy the projection equipment for video mapping, Lochtefeld said.

“I think we will be the only city in America with permanently-installed video mapping,” Eric Lochtefeld said.

It’s the same technology that was used at Katy Perry’s halftime show at the Super Bowl, he said.

Councilman Ian Bain is hopeful this will be another draw to get Redwood City residents to get out and enjoy their downtown.

“This is a great public benefit that businesses are providing,” Bain said.

Eric Lochtefeld, a former concert promoter, was inspired by the laser light shows that take place weekly at the harbor in Hong Kong.

He has since worked with the city’s Parks and Recreation Department and the Redwood City/San Mateo County Chamber of Commerce.

Eric Lochtefeld and chamber President Amy Buckmaster were instrumental in getting downtown businesses to buy into the improvement association.

“We walked door to door to talk to property owners about it being our turn to step up,” Eric Lochtefeld said about getting downtown businesses to contribute to the upkeep of downtown.

The Redwood City Improvement Association is a nonprofit that gets a portion of property tax revenue from the downtown core to support initiatives that boost business in the area.

It will spend some of its $800,000 in revenue this year on sidewalk cleaning, security, lighting and valet parking.

Lori Lochtefeld, who heads marketing for the association, is also coordinating the production of some television commercials to drive commerce downtown.

Courthouse Square attracts 3,000 to 5,000 people for concerts on Friday nights and Eric Lochtefeld hopes the Tuesday night light show will help do the same.

“We want to entertain the public and drive business downtown on and off night,” he said.

“This is not something you want to be late for,” he said.

To learn more about the artist go to bartkresa.com.

The original article can be located here.