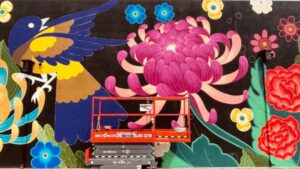 Bay Area artist Jet Martinez spoke with Patch about the inspiration behind a “showstopping” mural that highlights Redwood City’s history.

Martinez knew that Mexican explorers were among the first to settle in the area in the 1700s. He found that in the early 1900s, the city was known as the chrysanthemum capital of the world after Japanese immigrants settled in the area and began to grow flowers. He then read that while many Japanese Americans were held in internment camps in the aftermath of the attack on Pearl Harbor, local farmers collected cuttings from the flowers and returned them to the Japanese after they returned.

It was at this point that Martinez, who was born in Mexico and currently lives in Oakland, took some narrative liberties.

“I didn’t read that these were Mexican farmers, but being California, I made that assumption,” Martinez said to Patch. “I was just interested in this idea of these minority populations coming together, because a lot of times when we think about minority populations, it’s almost always through the lens of the white population.”

The result was the concept behind the mural, which will be placed on the southeast wall of 55 Perry Street. Titled “Chrysanthemums (Amate),” the painting features colorful birds and flowers, pairing bark paper paints from Central Mexico with wood block prints from Japan to connect two cultures that have made significant contributions to the city’s history. The mural, which will be visible from the neighboring Caltrain line, is expected to be completed by late May.

“Our goal is to make the city of Redwood City a better place for everyone from visitors to locals, so we are thrilled to see Jet Martinez beginning the creation of this showstopping mural in the heart of Redwood City,” said Amy Buckmaster, Executive Director of the Redwood City Improvement Association, in a news release. “Redwood City has such a deep and rich history. There could not have been a better time to bring attention to these two minority communities that helped make Redwood City what it is today.”

Martinez, who served as director of San Francisco’s Clarion Alley Mural after graduating from the San Francisco Art Institute and has had his work shown internationally, was interested in showcasing commonalities between nonwhite cultures, rather than what he said was the norm of highlighting the strife of minority cultures in the United States. He believes this idea of uniting communities is prescient today with the recent rise in anti-Asian hate.

“It just magnified a message I was trying to really convey,” Martinez said. “It’s energizing me as I’m painting. It’s one thing to put up a post on Instagram and say, ‘Stop Asian Hate,’ and it’s a whole other thing to be able to do something that just talks about love, talks about sharing with each other and creating these new American stories that aren’t always about strife and despair.”

Martinez believes that “good art doesn’t need to be all the way explained to you.” The history of Redwood City might not be immediately apparent to passersby, but Martinez’s hope is to just “create something that’s really executed and bright and uplifting,” and that people can find their own meaning from the painting.

The muralist said he’s received nothing but positive feedback from people walking by and watching him paint, joking that Redwood City residents are overly friendly and interrupting his concentration by trying to talk to him while he works.

“I want people to remember this mural, that it’s part of our Bay Area culture in general,” Martinez said. “I want people to feel happy but I also want people to want to dig a little bit further and find out about the history. I want them to feel like somebody was standing here with the intention of beautifying this place”