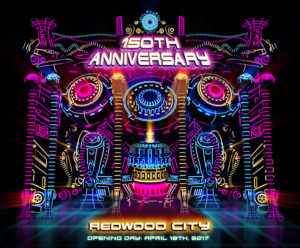 “We couldn’t think of a better way to honor the 150th anniversary than with a Magic Lantern 3-D Show that is a neighborhood tradition and brings the community together,” said Stacey Wagner, Redwood City Improvement Association’s President. “The show will play throughout the spring, so residents have a chance to come see the display and watch Redwood City’s past and present come together honoring our city’s history and culture.”

The Magic Lantern 3-D Show will cover the San Mateo County History Museum with an array of colorful lights taking viewers on an abstract adventure through Redwood City’s history. The show, titled RWC 150, depicts a mysterious time-travelling robot, from the days of redwood forests, through the hippie movement, and into the rise of Silicon Valley.

“The Magic Lantern 3-D Show is perfect for all ages, which makes it great for anyone in the community to enjoy,” said Wagner. “The show’s theme represents the Redwood City community as a whole and we hope that residents will enjoy the colorful tribute to our city and what makes it so special.”

The weekly Magic Lantern 3-D Show 150 Celebration is sponsored by the Redwood City Improvement Association, Facebook, Redwood City-San Mateo County Chamber of Commerce, Fox Theatre and Rosanne Foust & Jim Hartnett. The public can enjoy the show on opening night at 8:30 p.m. There will be one free 20-minute show on Tuesday nights.

The Redwood City Improvement Association (RCIA) was created in September 2014 as a non-profit 501(c)(3) corporation. The RCIA is a community benefit district ran by a board consisting of property owners, residents, community members and businesses. The board is responsible for making decisions in the areas of public safety, beautification, economic development, maintenance and promotions that are most beneficial for the community and its residents, while maintaining the culture and rarity of the downtown district. More information can be found by visiting, www.visitRWC.org or following RCIA on Instagram and Twitter and Facebook.