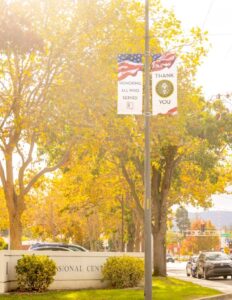 In honor of Veterans Day, the Redwood City Improvement Association (RCIA) unveiled a series of street banners throughout Downtown Redwood City. The banners will remain on display through the end of November.

The banners honor all six branches of the military, including the Air Force, Army, Coast Guard, Marine Corps, Navy, and Space Force, each banner depicting the seal associated with its corresponding branch. RCIA oversaw the creative design and installation of each banner in an effort to honor military members while maintaining the culture and rarity of the downtown district.

The installation is part of RCIA’s newest effort towards fulfilling their mission to keep the downtown attractive, clean, safe, orderly, and well-publicized. The banners will remain part of the downtown’s rotation of seasonal décor, timing their installment in alignment with Veterans Day annually.

RCIA is a non-profit run by a board made up of property owners, residents, community members, and businesses. Redwood City property owners created this association to fund special benefits above and beyond normal city services.