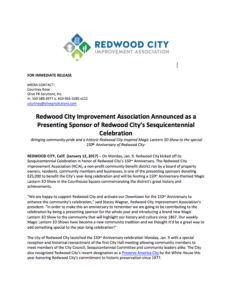 On Monday, Jan. 9, Redwood City kicked off its Sesquicentennial Celebration in honor of Redwood City’s 150th Anniversary. The Redwood City Improvement Association (RCIA), a non-profit community benefit district ran by a board of property owners, residents, community members and businesses, is one of the presenting sponsors donating $25,000 to benefit the City’s year-long celebration and will be hosting a 150th Anniversary-themed Magic Lantern 3D Show in the Courthouse Square commemorating the district’s great history and achievements.

“We are happy to support Redwood City and activate our Downtown for the 150th Anniversary to enhance the community’s celebration,” said Stacey Wagner, Redwood City Improvement Association’s president. “In order to make this an anniversary to remember we are going to be contributing to the celebration by being a presenting sponsor for the whole year and introducing a brand new Magic Lantern 3D Show to the community that will highlight our history and culture since 1867. Our weekly Magic Lantern 3D Shows have become a new community tradition and we thought it’d be a great way to add something special to the year-long celebration!”