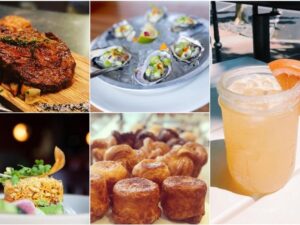 Redwood City is promoting its rich culinary diversity in an effort to boost local businesses amid the coronavirus crisis.

REDWOOD CITY, CA — At a time when a global pandemic eliminates the possibility of global travel, Peninsula residents don’t have to go far to experience some of the world’s faraway wonders — at least from a culinary standpoint.

That’s the theme of a City of Redwood City drive to promote its rich culinary diversity amid the economic impact of the coronavirus that’s devastated local business and restaurants in particular throughout the country.

“While we might not be stamping our passports any time soon, you can still take a gastronomic trip around the globe no passport required,” the Redwood City Improvement Association said in a news release.

“Redwood City, one of the Bay Area’s most resilient and diverse communities, is home to some of our favorite hotspots bringing international flare to the golden coast, only baggage you will need is an empty stomach.”

Take a tour of Asia with some traditional Japanese teppanyaki at Sakura, sip on sake and shochu cocktails at Kemuri, or enjoy fresh rolls from Yokohama. Indulge in traditional Indian cuisine such as curry and chicken tikka from Broadway Masala. Sink your teeth into some Mandarin flavors with kung pao chicken and Szechwan pork from Crouching Tiger. Enjoy inventive take on Persian cuisine with kabobs and Halal steaks from Arya Steakhouse.

Set sail through the Mediterranean with house made tzatziki and hummus from Pasaha. Feel like a Greek god while snacking on falafel, gyros and other coastal eats from Zadna and Nick the Greek. Grab your lederhosen and enjoy a taste of Germany with schnitzel and bratwurst from Gourmet Haus Staudt along with an assortment of draft beers. Soak in the aromas of France with freshly bakes tarts, pastries, and brioche from Mademoiselle Collette. Feel the amore with wood-fired pizzas, charcuterie, and gelato from Vesta. Feel the luck of the Irish with beer-battered fish & chips and a “trinity cheesecake” made with Guinness brownie, Baileys cheesecake and Tullamore Dew whiskey infused chocolate ganache at Alhambra Irish House.

Dance to Tejano and go South of the Border with enchiladas, tostadas, and hand shaken margaritas from Milagros and Quinto Sol. Fresh guacamole, tapas, and sangria from LV Mar will transport you to the streets of Spain. Enjoy the sophisticated flavors of Buenos Aires at Venga with empanadas and satisfy your sweet tooth with some alfajores.

Want to stay up-to-date with the RCIA? Sign up for our newsletter!