A dispiriting revelation about the state of the environment became a source of inspiration for Tara de la Garza.

REDWOOD CITY, CA — Tara de la Garza always knew the problem was bad. That a blob of trash twice the size of Texas that floats on the Pacific is a concern to anyone who cares even remotely about marine life and the state of our planet.

But it wasn’t until she viewed the photo of a decomposing albatross with a stomach full of plastic in a natural history book a few years ago that the true magnitude of this environmental crisis came into focus for her.
Plastic waste wasn’t supposed to permeate the pristine waters of Antarctica where these majestic seabirds flourish, or so de la Garza thought.

But an environmental catastrophe that has caused many to despair has become a source of motivation for the Peninsula artist.
The catastrophic environmental ramifications of a consumer culture that puts convenience ahead of sustainability inspired De la Garza’s “Monuments to the Plastocene IV,” a collection currently on exhibit at Redwood City’s Art Kiosk.

De la Garza, a Menlo Park resident of Irish descent who was raised in Australia, collects single-use plastic items found in her community which she embeds in sculptures and art tubes for the installation.

“We are going to have this human made material for millennia, so we may as well find something to do with it,” de la Garza told Patch.

The free exhibit is on display every day and night at the Art Kiosk (2208 Broadway St., Redwood City) through Sunday, July 5. The art exhibit will only be viewable from the windows outside of the Art Kiosk and visitors are required to practice proper social distancing and wear a mask.
The exhibit is presented by the Redwood City Improvement Association in partnership with Fung Collaboratives.

The solo installation features six sculptures and 22 lights that surround the kiosk. The light tubes are wrapped in colorful soft plastic that act as light gels, creating an immersive, experience especially at night, when the colors pop.

De la Garza believes that by showcasing single-use plastic material that’s part of our everyday lives, those who view her exhibit will “realize their own level of consumption in a more visceral way.”

She believes art is a more effective way to communicate her message to the public than by brow-beating those who aren’t aware of the impact single-use plastic has on the environment.

“I think the physical action of this (collecting plastic materials), rather than a lecture, is a good way to get the message across,” she said.

It is a message that environmental scientists consider urgent.

“Previously we would feel good about placing these items in a recycle bin and this is just a lie we are collectively telling ourselves,” de la Garza said, noting that sequestering plastic just keeps it from landfill with only 9% of the plastic used globally actually getting recycled.

Much of the plastic intended for recycling is dumped or burned in parts of the developed world, killing up to a million people a year according to a report in The Guardian.

De la Garza said she hopes elevating plastic as a medium can help raise awareness of the dire threat the material poses to our planet.

“I would like the audience to consider what impact their consumption has on the planet and to consider reducing the amount of plastic waste they consume,” she said.

De la Garza is an internationally renowned artist whose work is featured at featured in New York City’s Metropolitan Museum of Art’s permanent collection. Her exhibits have been showcased at museums in Boston and San Francisco.

Some of these works will be viewable at Silicon Valley Sculpture 2020 in late September at Menlo College.

The title of de la Garza’s exhibit is a play on the term Anthropocene, a term used to describe the human epoch. But de la Garza believes that as archeologists dig through this man-made environmental disaster, they’ll see what she’s termed “the Plastocene.”

De la Garza’s exhibit gives voice to the albatross whose suffering inspired her mission to push for environmental justice through art.

“When we move away from the ubiquity of plastic, we can look back on these sculptures as time capsules of past consumption and oddities in the future as we do Bakelite telephones.” 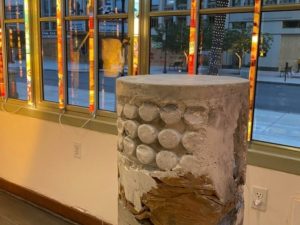 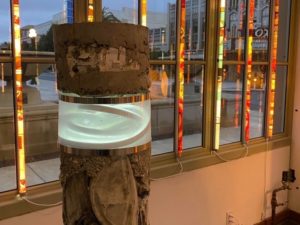