‘Voice Crossing’ is part of the yearlong Art Kiosk exhibition 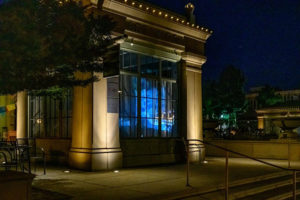 A new public art installation offering a glimpse of the Bay Area’s past via archival footage and audio recordings will be unveiled in Redwood City’s Courthouse Square Saturday, Oct. 12.

The piece, titled “Voice Crossing” by Joseph Clayton Mills, 48, will be on view in one of the glass-walled kiosks in the square 24 hours a day through Nov. 10. It’s part of a series of site-specific installations in the same space called Art Kiosk that began in January and features a new work every month.

The project is curated by Fung Collaboratives and funded by the Redwood City Improvement Association, which this week voted to add another 10 installations to the lineup, extending the series through 2020.

In “Voice Crossing,” archival films of holiday parades, marching bands, square dances and family celebrations that occurred throughout the Bay Area between the 1920s and 1980s are projected through a series of rotating mirrors, creating a kaleidoscope of overlapping images, Mills said. The parades are depicted such that the viewer is watching the “community moving through time,” he added.

In the footage, which was gathered from archives and libraries throughout the Bay Area, familiar storefronts and local landmarks such as the Fox Theatre can also be spotted.

The images are accompanied by oral history recordings about life as an immigrant worker in the 1940s, for example, the birth of Silicon Valley and the gay rights movement, to name a few examples. The recordings are layered on top of each other so it becomes a murmuring crowd of voices that sounds like it’s coming from around the square, Mills said.

“The idea is that a community is made of individual stories and lives and when you put them together you come up with something much vaster than any individual perspective or experience or moment of time even, but it always exists as an unconscious substrate to the community you’re living in now,” he said. “What I want to do is not so much tell stories as invite a person experiencing the installation to understand their own story is subsumed in a larger story of the community.”

The concept was inspired by the site, Mills said.

“I was thinking about the Fox Theatre across the way, it made me think of projections and films. And Courthouse Square is a gathering space, and the sound of the fountain made me think of murmuring voices so it went from there,” he said.

Mills currently lives in Phoenix, but spent a year in San Francisco and visited Redwood City during that time. Needless to say, the city has changed dramatically since then.

“Visiting now it’s very different, it’s extremely vibrant and the things happening in Courthouse Square seem to be amazing so I’m really struck by that,” he said. “The city has a real vitality that’s impressed me.”

The opening reception for the piece will be at 4 p.m. Saturday when a handful of speakers, including Mills, will take the mic. Refreshments will be offered. Art Kiosk this year has featured work by nationally known artists while next year’s program will be devoted only to Bay Area artists, including established and emerging ones.