Where to find new public art on the Midpeninsula 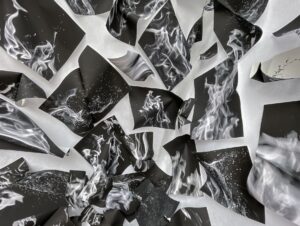 Public art continues to blossom this spring, with new works popping up around the Midpeninsula. A few highlights are listed below.

A new, 100-foot mural is underway at 55 Perry St. in downtown Redwood City, which honors the city’s history of growing chrysanthemums, and the farming community that grew them. The mural, by artist Jet Martinez, offers vibrant colors and a bird-and-floral motif, and is part of the city’s Commercial Way Mural Corridor.

“Jet will be pulling additional inspiration from two folk art forms: bark paper paintings from Central Mexico, and woodblock prints from Japan. By pairing these art forms from two different cultures, he hopes to draw connections between Mexican American and Japanese American communities that have contributed greatly to Redwood City’s history,” according to a press release from the Redwood City Improvement Association.

Over at Courthouse Square, also in downtown Redwood City, the latest installation at the Art Kiosk is local photographer and paper sculptor Cindy Stokes’ “Close to Home,” which examines humanity’s often uneasy relationship with fire. Her piece incorporates photos taken of family campfires — representing the role of fire as a thing of comfort and kinship — sculpted into curving forms. On the backs are drawings made with ink made from burned wood from the 2020 CZU complex fire, representing fire’s dangerous, uncontrollable side. The sculpted photos are arranged into flame-like shapes evoking a wildfire and, by night, illuminated with colored light, to further enhance the fiery impression.

“This is my first installation art project, and it’s been gratifying to expand from making traditionally exhibited photographs on the wall to create a whole environment using my sculptural photographs, supporting structure and lighting,” Stokes told this news organization.

“Close to Home” will be on view through May 30. A virtual reception will be held over Zoom on May 4 at 8 p.m.

While Stanford University’s Academic Campus Zone remains closed to the public for the time being, authorized visitors to the Science and Engineering Quad will notice a massive new sculptural installation — Pars pro Toto — by artist Alicja Kwade. Twelve stone spheres, ranging from 16 to 98 inches in size, bedeck the quad, made from material sourced from eight different countries. The solar-system-like artwork reflects its connection to the sciences, and the artist decided on the positioning of the sculptures by tossing tiny spheres into a model of the quad. “This gesture implies a higher being playing marbles with these planet-like spheres, creating a new universe,” according to a statement from Kwade published by Stanford News. “The arrangement also references billiard breaks, a real-world action used to visualize quantum analogues.”

“Fish in the Tree,” at 259 Matadero Ave., is part of Palo Alto’s ArtLift microgrant program. Courtesy city of Palo Alto.

Palo Alto’s ArtLift microgrant projects continue to roll out across town, and the city’s public-art department has set up an online interactive map and guide to the current and upcoming projects. Recent additions include “Fish in the Tree” by Erica Lee, which offers passersby the chance to look up and discovery tinkling bells and whimsical fish at 259 Matadero Ave., and “Trash to Treasure” on the Gunn High School campus, for which artist and teacher Deanna Messinger helped students create humanoid figures out of household plastic waste. The figures not only bring awareness to issues of waste and recycling but also serve as “safety spacers” to help mark safe social distances around campus and at events. The website is expected to be updated several times a week as the projects are unveiled, according to Public Art Program Director Elise deMarzo.